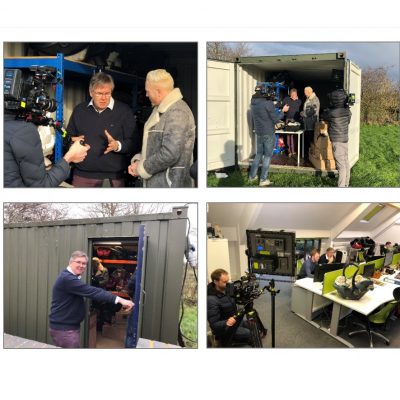 JMDA’s campaign to tackle the global environmental problem of recycling car seats, takes another step forward in raising awareness, with a BBC film crew visiting their head office in Pershore, Worcestershire. With the BBC presenter and record-breaking athlete Iwan Thomas interviewing Derrick Barker from JMDA, they explore what has motivated the company to firstly try and dismantle their own car seats, and secondly the possibilities of an industrial scale solution.

The birth of JMDA’s car seat recycling campaign, to raise awareness, and to find a practical and commercial solution, to tackling end of life products entering the landfill system, started over 18 months ago. With the war on plastics increasingly in the press, a BBC film crew visited JMDA on 10th February to find out the story so far and what could be done.

After interviewing consumers in the local area, filming began at JMDA’s storage units to fully understand why child car seats are so hard to recycle and why a scheme is not already in place. As experts in designing car seats, JMDA’s storage units are full of car seats which were once used for research purposes, which then need to be disposed of on an ongoing basis. This was the launch pad for the campaign and through the interview with Derrick and Iwan, it was explained how staff at JMDA tried to dismantle the car seats themselves. It could take up to a day of man hours to dismantle a car seat by hand, using power tools, mainly because of its rigid structure as a safety unit, but also because car seats are made up of a complex mixture of materials; steel, aluminium, difference types of plastic and fabrics.

Derrick explained to Iwan “It’s not a question of whether or not car seats and the materials in it can be recycled. We’ve already proven that with our trial last year by placing car seats into scrap cars, which were then passed through an industrial shredder. The material can then easily be separated in this way and then recycled or incinerated to provide energy. The biggest hurdle is moving used car seats from collection points across the country to processing plants for shredding. Obviously, there is a cost implication in moving the car seats and therefore the logistics are hindered by commercial factors. So who foots the cost of moving them? This is an issue for the whole industry including manufacturers, retailers, waste management and local authorities. JMDA will continue the work already started with the car seat industry to help establish a solution.”

To the surprise of the BBC film crew and Iwan, in the UK alone it is estimated that some 2.3 million* child car seats are sold every year and therefore this is a huge issue, which is ever increasing. It’s hoped that with the help of the BBC to increase the awareness and pace to find a way forward, a commercially viable scheme may be found.

JMDA is proud that products we designed have received
recognition with industry and category awards.